I’ve shown you in the past how different yarns take colour differently.  We can put five of our favourite yarn bases in the same dyepot at the same time, and all five can come out decidedly differently.  In fact, we did!  Take a look: 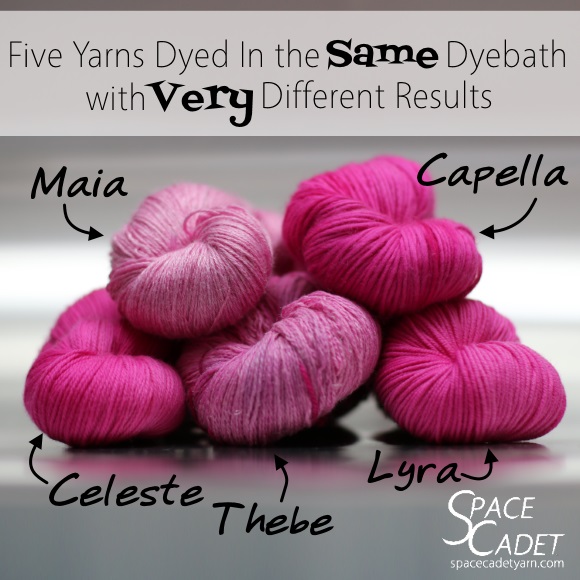 Now, when customers ask me about this, I usually explain it in terms of fiber content, but there’s actually more to it than that — and it’s fascinating (well, at least I think it’s fascinating!).  Here, let me explain and I’ll try not geek out too much…

The first is, of course, fiber content.  Different fibers react to our dyes differently and so the colour from the same dyebath can vary considerably from one yarn to another.  In the picture above, all the yarns were dyed together in the colourway “Tickled” but notice how soft and faded both Maia and Thebe are.  That’s because both of them contain substantial amounts of cellulose (plant) fibers, which our dyes (acid dyes) simply don’t stick to.  In the case of Thebe, linen makes of 35% of the yarn and it just doesn’t take the dye at all.  In the case of Maia, it’s the bamboo — 80% of the yarn — that doesn’t take on any dye.  The result is a much softer colour even though, if you look closely at the wool choke tie on the Thebe, you can see they went into the exact same dyebath. 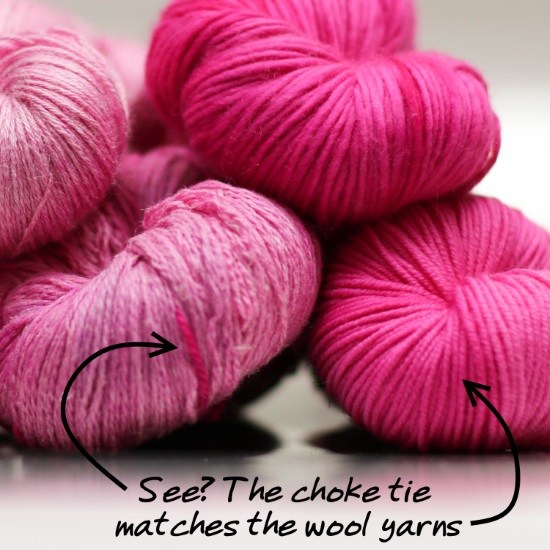 But so far, I’m not telling you anything new, right?  If you’ve been reading my posts and emails for a while, you already know this!  It’s the basis for the awesome Combining Yarn KCAL that we’ve got going on at the moment, where lots of folks are taking two different but compatible yarns and combining them in the same project. Most people are working with my favourite combination, Celeste and Maia, and the results are stunning.  I asked them what they found surprising about combining two different yarns and one of the best comments was, “What surprised me the most is how fun it is to combine yarns.”  YASSSS!!!!   She went on, “I’ve never combined different types of yarns before and to be honest I wouldn’t have if it wasn’t for this KCAL.”  Oh, that makes me so happy.  That’s exactly what I’d hoped for when we started the KCAL and it’s what makes the way different fibers take dye so much fun!

But there’s more to the story than just fiber content.  Another factor in how yarn takes colour is…

This is one that you might not think of straight away but then it totally makes sense when you do.   Yarn is dyed in bath of dye and water (so far, so obvious) and so the way it takes colour is dependent on how the yarn absorbs that water.  Some yarns absorb slowly, some absorb quickly, some resist the water with all their might, and others drink it up like a sponge.  The intensity of the final colour depends on the amount of dyewater (and dye) that the yarn has absorbed at the point where the dyepot comes up to temperature.  If less water has soaked into the yarn at that point, the colour will be softer, but if the water has really saturated the yarn, the colour will be more saturated as well. 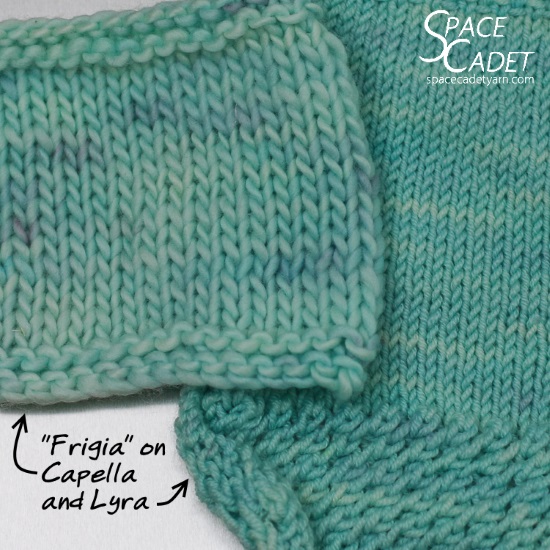 Think of it like this: if you spilled your tea across your table and grabbed a paper towel with one hand and bunch of cotton balls with the other, you’d expect one of those to absorb the spill faster than the other, right?  The paper towel would soak the whole spill up super fast and the cotton balls would take a lot longer and leave half of it smeared all over the table.  It’s the same with yarn, and Capella is a great example of this.  It’s a 100% superwash merino single-ply worsted — basically one giant, soft puffball — and water soaks into it really slowly, giving a very soft and muted result. 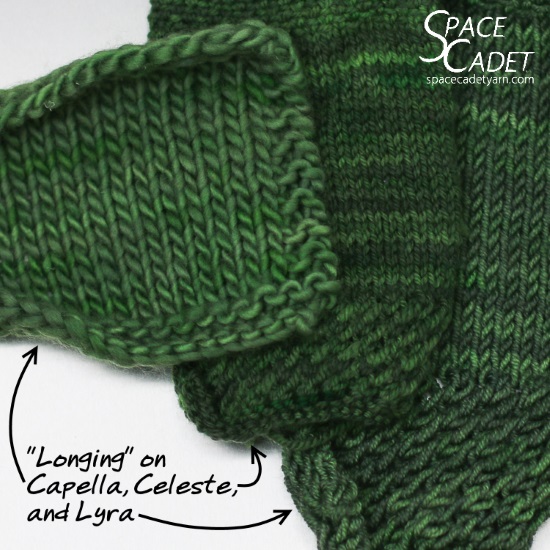 You can see it in a lighter colour like Frigia (the light blue above), but it’s super noticeable on a darker shade such as Longing (the forest green).  Even though all these swatches have the exact same fiber content, the thickness of the yarn makes all the difference.  It’s not something you might think of at first, but it’s so logical once you do.

And the last thing we’re going to discuss brings elements of the other two together, and that’s…

It’s not just what it’s made of and it’s not just how thick it is, it’s also how the yarn is spun.  If you’ve ever tried spinning yourself, you’ll understand the importance of plies and the myriad ways they can be put together to affect a yarn’s look and behaviour.  That impact also extends to the way the yarn absorbs water and, therefore, dye. 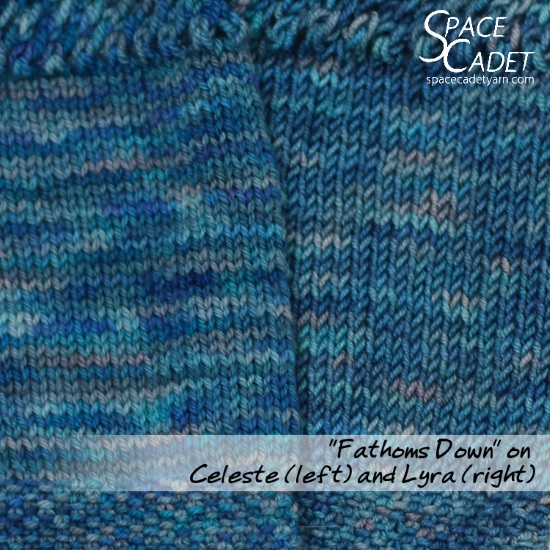 Now in both yarns, that first set of strands (three for Celeste and eight for Lyra) are about the same thickness and, all other things being equal, they’d absorb the dye in a similar fashion.  But they way they are then twisted together — the way the yarn is constructed — is what makes the difference to how the final colour looks.  Even though the first plies are no thicker, the twisting and twisting again means it’s much harder for the dyewater to soak into Lyra.  It absorbs more slowly and the dye is free to float about in the dyebath for longer. 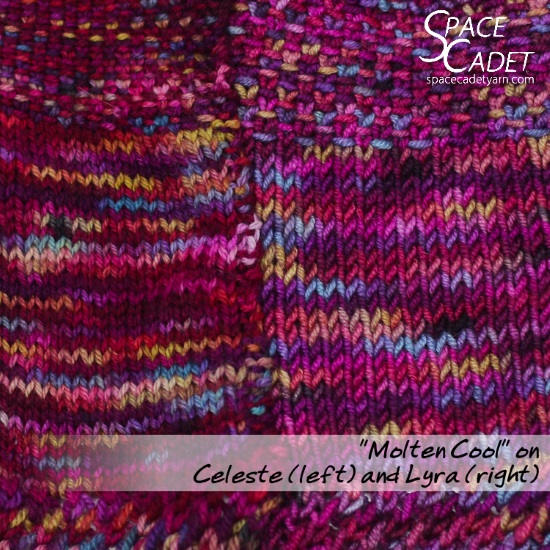 The result is a decidedly different effect on the two yarns, and it can be especially noticeable in variegated colourways.  See how the colours on the “Fathoms Down” Lyra swatch look more blended?  And in Celeste, they look sharper and more distinct?  That’s because the dye was able to aborb into the Celeste quickly and stuck in that spot, instead of swirling around in the dyebath and soaking in slowly.  In the “Molten Cool,” the difference is really striking — the colours hit Celeste and just didn’t budge!  On Lyra, they are much more blended.

What Does this Mean to You?

Do you need to worry about this?  Not at all — it’s part of the nature of hand-dyed yarn and, to me, part of its beauty.  As long as you understand and are comfortable with the differences when you plan your projects, it’ll be smooth sailing.  Most knitters and crocheters I meet have no idea how these three factors affect the yarn they buy.  Now that you do, you’re ahead of the game!

Is this all there is to it?  Not by a long shot!  There are a ton of different outside factors that impact the way dye adheres to yarn and, as I said, I could totally geek out about this and go on for ever and ever!