Do you use the app Knitrino? It’s an app that aims to make following knitting patterns easier and more convenient, but it nearly didn’t come into being when Apple rejected it from the App Store.  I found fascinating this quick article detailing the saga behind the story.

The knitting world exploded with (yet another) controversy recently, when designer Romi Hill tweeted a strong opinion on her belief in the importance of blocking projects. 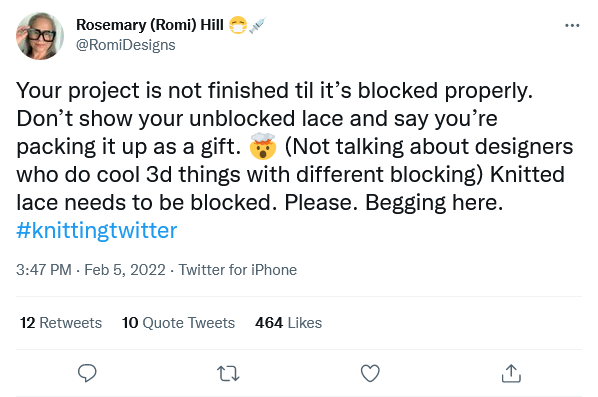 While there were a lot of comments to the original tweet, the more heated discussions were in quote tweets (along with other threads all over Twitter) and centered on whether blocking was necessary and even whether designers or knitters should tell other knitters how to define when their projects are finished.  There was a lot of food for thought and it seemed like everyone who is anyone on Knitting Twitter weighed in.  Though it may have been a little too heated, as Romi posted this apology a few days later.

I love short rows for creating interesting and almost architectural shaping to knitting.  There are lots of different ways to do them, and if your pattern is written with wrap&turn short rows but you prefer German, I absolutely love this handy (and so clearly written!) explanation of how to convert a wrap and turn short-row to German short-row.