You may recall that my sister, who spent the last two decades pshawing my suggestions that she try knitting, has picked up the needles at last  …and discovered that she loves it.   She’s on her second garter-knit scarf and carries her WIP with her everywhere.  She’s becoming a knitter.  I’m more than a little stunned.

But so far, she’s been knitting in isolation.  Occasionally, she’s run into a fellow knitter on the bus and they’ve discussed projects and yarns in the short time before her stop arrives but, for the most part, she’s been knitting on her own, without the camaraderie of other knitters.  And that’s not right, is it?!? 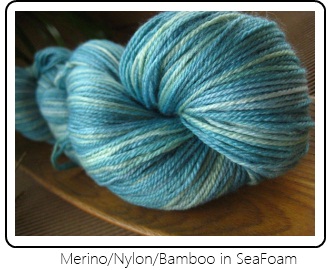 And so I’ve been encouraging her to check out her local LYS’s knit groups.  But it turns out they’re on nights that don’t work with her schedule.  And joining a new group can be a little intimidating, especially for someone who has just learned to knit.  The one night she did make it there, she wandered around looking at the yarn and peeking at the knitting group from behind the shelves — but never got the nerve to actually sit with them and knit.

I understand.  It’s hard to join a new group, knitting or not.  And…  well…  she’s seen with her own eyes how crazy knitters get!  So, yeah, I can understand… 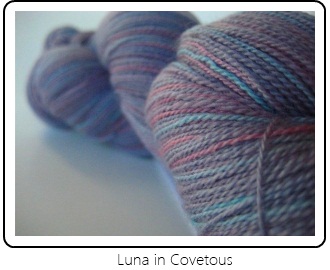 I was on the phone to her this week.  “Oh! Oh! I have to tell you!” she suddenly exclaimed.  “It’s about the knitting…”  She’d been chatting to a neighbour who, out of the blue, mentioned something about knitting.   My sister pulled out her WIP.  They discussed projects, yarns…  and then, the neighbour said she wasn’t going to the knitting group that week.

“The knitting group?” my sister inquired.

Here was a group she could join!  These were people she already knew, and liked  …and they’re knitters too.  It couldn’t be more perfect. 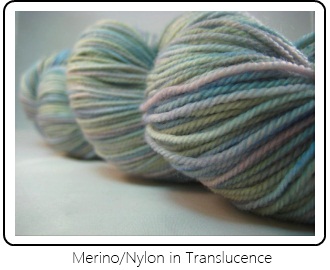 BUT… this group also meets on a day that doesn’t work with her schedule.  Ok, I said, so maybe you could open a sort of second “branch” of this knitting group, on a day that works for you.  And people could go to either or both, whichever best fits their schedule.

She laughed out loud at the thought.  “You mean, in a few weeks’ time, I could actually belong a knitting group?  That meets in my flat?!?”

Yeah…  I guess she…  well, she really could.

You remember I said up at the beginning that her knitting adventure has me a bit stunned?  Yep, at that moment, you could have knocked me right over with a feather.

Oh, hey, listen…  Thursday is Thanksgiving (which has totally taken me by surprise — were you ready for it?!?).  So first, a very Happy Thanksgiving to all of you.

And then, of course, Thanksgiving starts the madness that is the holiday shopping season, so I want to give you a heads up that I will be launching a special Holiday Gift Subscription the the SpaceCadet’s yarn club, the InterStellar Yarn Alliance.  It’s a fabulous way to give a gift to a knitter or crocheter in your life that will keep them happy all year long.

And be quick, because spaces are limited and the Alliance doesn’t open to new members very often at all.  But more than that, I’ll be offering a special one-day introductory discount on Black Friday only.  So, enjoy your turkey, have a wonderful wonderful Thanksgiving…  and then, on Black Friday, let everyone else go mad rushing off to the shops, and you can score yourself some great Gifts of Yarny Goodness without even changing out of your PJs!

Do you remember my sister?  I’ve mentioned her on the blog before.  She’s incredibly supportive of SpaceCadet Creations but she’s never been a knitter, never been the least bit interested, and so when she helped me out at several yarn shows this past year, she was pretty much completely unprepared for the experience.  Like when she saw the line that stretched all the way down the sidewalk as knitters and crocheters waited for the doors to open at the Pittsburgh Knit & Crochet Festival (“People are here already?!?  They’re waiting?!?”).  And her shock that vendors were going shopping and buying yarn from other vendors (“Why would they do that?  Don’t they have their own yarn?”).  And then the beautifully entertaining look on her face when she finally encountered her first fiber-crazed knitter (“These people are crazy!” ).  Ah yes, watching my sister’s initiation into the world of yarn has been very amusing indeed!

I have tried, on and off for twenty years, to get her to try knitting and she’s never been interested.  I’ve explained how relaxing it is, how grounding.  I described it in terms of yoga and meditation.  I’ve held mouth-watering yarns in front of her.  But nope, knitting was my thing, and definitely not for her.  And helping out at yarn festivals didn’t seem to make any difference at all.  So I felt really confident when I chose the title for this series of blog posts: “Things My Non-Knitting Sister Says”.  Because my sister does not knit.

And then, a small miracle has occurred.  Somewhere in the world, the earth has moved, a sea has parted, perhaps the planet ceased spinning on its axis for one brief moment…  Because earlier this summer, my sister learned to knit.

*insert sound of a record scratching*

I’m trying to remember how it came about, exactly.  Did my sister ask to be taught?  Did my friend Natalie just decide it was time she learned?  I’m not sure but, either way, I just remember the two of them sitting on the couch, Natalie patiently showing her how to hold the needles, and my sister quietly chanting, “in, around, out, and off… in, around, out, and…”.  By the time my sister left for home, she had that rhythm downpat, Natalie had given her the needles, and she had a brand-new skein of SpaceCadet yarn cast on for a garter stitch scarf.
Weeks went by and I heard nothing.  I was almost afraid to ask, imagining the needles untouched, the cast-on stitches left exactly as they had been when she left.  And then, at last, a text message…  it said, “I don’t know what you’ve done to me, but I CANNOT stop knitting.  I’ve been doing it every day.  This is amazing!”

Ladies and Gentlemen, I present to the world a new knitter.  And I ask you to welcome her into the fold, into our wonderful universe of fibery goodness.  She is taking baby steps, to be sure — and please, do try not to spook her — but she is most definitely on her way.  I’m so proud of her!  And if you are too, please, leave a comment and let her know — new knitters need encouragement, don’t you think?

And here’s the best bit — the next time you see her at a yarn festival, sitting there taking payments and handling the money, and you’re holding a huge pile of yarn and gazing at it and petting it fondly, you can rest assured she probably doesn’t think you’re crazy any more…  Little by little, row by row, she’s starting to get it!

If you attended either the Pittsburgh Knit and Crochet Festival or HomeSpun Yarn Party this year, you might have met my sister.  She was the one running the credit card machine and handing the cash, and she does a great job at that, but she doesn’t know anything about knitting.  She lives her life blissfully unaware of all things fiber-related (though I’m not quite sure how that can possibly be blissful!), except when I call and ask if she’d lend a hand.

So the whole fiber-festival thing was completely new to her, and it took her pretty much completely by surprise.  I think she might have been expecting sweet little old ladies and crocheted toilet paper covers…

Her first words, as we walked past the huge line of fiber-fanatics waiting for the doors to open, were, “People are here already?!?  They’re waiting?!?”  Her eyes were wide with surprise, and I stopped myself from giggling.  She really didn’t know what she was in for.

But she got her second clue a few minutes after the festival got started.  We were sitting near to one of the entrances and a woman walked in, went right up to my sister, with a face that looked almost frantic, and exclaimed, “I’m so excited!!!” before rushing off into the crowd.

“These people are crazy!” my sister said, looking a little frantic herself.  “That lady actually grabbed me when she said that!  What’s going on?!?”

I couldn’t stop myself laughing now.  When you’re a fiber-freak yourself, when you knit and spin every chance you get, when you’re surrounded by all this all the time, you forget that this doesn’t look normal to outsiders.  You forget that it seems a bit, well.. yeah…  crazy.

But it’s not.  It’s perfectly normal.  You and I know that.  …And my sister will come ’round in time.